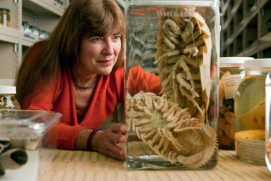 Regina Wetzer is Associate Curator and Director of the Marine Biodiversity Center at the Natural History Museum of Los Angeles County (LACM).

Since high school Regina has been fascinated with invertebrates — their bizarre forms and crazy life histories. She was introduced to marine field work in the Sea of Cortez as an undergraduate at Loyola Marymount University and fell in love with both invertebrates and exotic places.

After completing a Master’s Degree at California State University Long Beach working on gills of snails, followed by a year working for a Southern California supplier of marine invertebrates for scientific research, she joined the LACM as Curatorial Assistant in Crustacea. She moved to the San Diego Natural History Museum as Senior Invertebrate Collections Manager, and completed her Ph.D. at the University of South Carolina on molecular and morphological systematics of crustaceans.

Returning to the LACM in late 1999, she works with an extraordinary team of Invertebrate Collections Managers who collectively oversee, curate, and manage the great diversity of animals (35 phyla) in the LACM marine invertebrate collections. LACM holds tens of millions of such specimens, some dating from as long ago as the Ediacaran (542 mya) to the present day.

In 2016 Wetzer and her team launched the Diversity Initiative for the Southern California Ocean (DISCO) at the LACM. This research initiative is greatly enhancing biodiversity documentation in the marine environment by applying modern genetic technology.